A Zelda-like is a game where progression is accomplished by obtaining key items.
In my opinion, this is the core design of a Zelda game, and what makes it different from other action-adventure games. In Zelda, you do not gain experience points that level up your stats. Instead, you obtain new items (the Hookshot, the Bombs, etcetera) which directly enable the player to access new areas of the game. Critically, key items unlock progression in three primary areas of the design: Combat, Puzzles, and Exploration. Here is an outline. 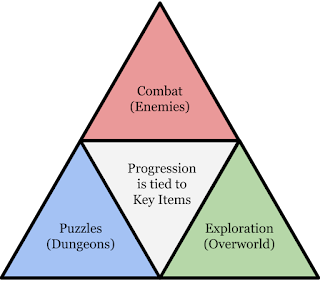 Key Items and Puzzles
- Key items are used to solve puzzles.
- Especially in dungeons, a staple of Zelda-likes.

Key Items and Combat
- Enemies are designed to be defeated with a particular item--they are puzzles themselves.

Key Items and Exploration: The first design element of a Zelda-like is the way in which key items allow the player to explore new areas of the game world. For instance, getting the bombs allows the player to blow up rocks that are blocking a path. This is the same style world-design that characterizes the Metroidvania genre. Every new key item allows the player to explore new areas of the world. However, compared to Metroidvanias, mainline Zelda games usually have a very linear overarching structure, where you find one item at a time. But, I do not think this is a requirement of the genre (rather an area where Zelda might improve). Thus, the distinction between a Zelda-like and a general Metroidvania must come in the other two elements.

Key Items and Puzzles: Different from Metroidvanias, Zelda-like games have a very strong focus on puzzles, especially in dungeons. Particularly, the puzzles in Zelda-likes require using your key items in a specific way in order to get past the obstacle. Puzzles build on previous mechanics throughout the entire game--as you gain new key items, learn new mechanics, and discover new uses for your key items. The best Zelda puzzles require thinking of a creative use for your items, and applying it to the problem. The specific way that dungeons are designed to create this experience is a blog post all on its own. The point is that the puzzles in the game utilize the player’s items for their solutions.

Key Items and Combat: The final element of a Zelda-like is combat and enemies. Key items are not just tools for exploration and solving puzzles--they are useful in combat as well. Enemies in Zelda-games (especially bosses) are often designed to require a particular key item to be defeated. In this way, Zelda enemies are puzzles as well, and they provide a practical use for your items when you aren’t navigating dungeons or exploring new areas.

How to Procedurally Generate a Zelda-like?

From this definition, it becomes clear many of the challenges with creating a “procedurally generated Zelda-like.” Primarily, there is the difficulty of generating a sense of progression from the items which are collected. In a rouge-like, the order of progression does not especially matter--you work with whatever items you get, and the terrain is generally traversable with any set of abilities. In a Zelda-like, there needs to be terrain and puzzles generated according to which items you obtain. Further, these obstacles should build on previous mechanics. For example, once you get a second key item, you now should be solving puzzles which require both of your new abilities.

The element of enemy design is a little easier to manage. Enemies can be handcrafted to work well with particular key items. Thus, it is only the matter of well designed enemies, and having a large diversity of enemies for different key items. (Procedurally generating new enemies is a whole other level, which I will not be tackling any time soon).

The structure of a procedurally generated Metroidvania world I also do not expect to be super challenging. This can be accomplished with a simple check of locks (key items) and keys (simple obstacles). However, dungeons and especially specific puzzles will be very difficult. Dungeon overarching structure shares many elements of the overworld generation, but the puzzles within dungeons are more complicated. In part, I may create many handcrafted rooms to test certain puzzle mechanics, but the combinations of puzzles are exponential compared to what I would have to make for a normal Zelda-like, to account for every order which you could obtain the key items. I have a few ideas for this though, which I will elaborate on in the future.

This makes clear the primary challenge of this project, and what I must do to accomplish my goal. Without key items that are used to solve puzzles and progress in the over-world, I have merely made an action-adventure game. Now, that is still cool, but I want to make something more interesting than that. Hopefully I can create algorithms to structure an experience around gathering key items.

I have a few more things to mention regarding Zelda-like game design. First regarding open-world Zelda-likes, such as Breath of the Wild, or the original Legend of Zelda. With my definition of a Zelda-like, open world Zelda games does not utilize the way that key items are tied to exploration. In this way, I think that BotW is lacking an important aspect of what it means to be a Zelda game. It still feels like a Zelda game, because of the emphasis on puzzles (shrines), and because there isn’t progression in any other form. But, it isn’t quite the same.

What I’d like to see in the future of Zelda is a stronger emphasis on Metroidvania world design. This could make a game world where progression is tied to key items, but the exploration is also non-linear by providing many choices for the order which you obtain items. I think this could make a better Zelda game than the open-world design that we see in BotW.

In addition, there is an element of soft progression which is present in Zelda-likes. Generally, later areas in the game, even if they are technically accessible with your current key items, are designed to be more challenging than earlier areas. This encourages a particular order of play, even if that progression is not directly dictated by the items you have. This is generally good design practice, and can be used in Zelda-likes to add more structure to an open-world experience. (This is what I did in The Last Librarian).

Finally, I want to talk about the story in Zelda-likes. The Legend of Zelda series does not have a very strong emphasis on the story, but I do not think that is a requirement of the genre. The world of a Zelda-like can be greatly improved by an epic story and well developed characters, and I’d like to see that more in future Zelda games as well. This is certainly an aspect of the game that I will focus on in Daughter of Dreams (and I did so as well in The Last Librarian). The narrative in a game can serve a critical role in building the world and keeping the player engaged.

So here, at least for the purposes of Daughter of Dreams my formal definition of Zelda-likes as a genre. If you think I missed something, please let me know. Here are a few other resources.

Posted by Cloaked Games at February 09, 2020 No comments: